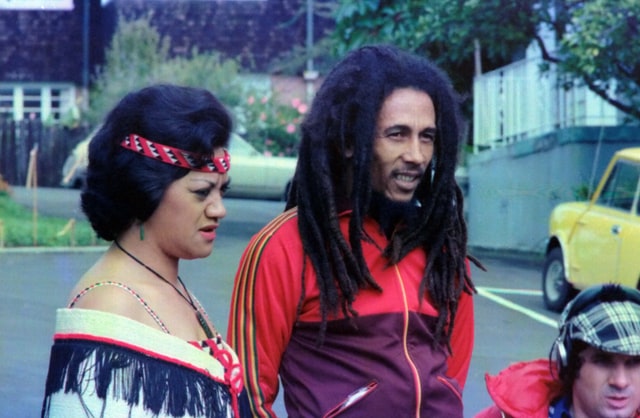 During this report we will be able to identify, who is Bob Marely and The Wailer?

Why did this band have such an impact on the music world, in a way that allows their music to be relevant to today’s youth? This essay will take a closer look at a few songs that are still crossing generation gaps and racial barriers. It will uncover how the band’s music made an impact on race and self-glory or pride and religion. Bob Marley and The Wailers like most musicians speak to the masses with their direct and indirect lyrics, connecting and addressing controversy of that time. Music like Bob Marley and The Wailers passes the test of time, and not only connects and addresses the controversy of their time period but transcends generations and speaks to the controversy of any time period.

This band lived and followed the same core values as Saint Leo.

Bob Marley and The Wailers fall under the Rock subgenre Reggae, earlier ska. The Band originated in Kingston, Jamaica and has been active since 1981. The band was led by Bob Marley, they are a vocal group. The group was first called The Wailing Rude Boys then The Wailing Wailers prior to settling on The Wailers. The Wailers was created in 1963 by Nesta Robert Marley, more widely and commonly known as Bob Marley. The founding members of The Wailers were Bob Marley born on February 6, 1945; Peter Tosh born Winston Hubert McIntosh on October 14, 1944; and Bunny Wailer born Neville O’Riley Livingston on April 10, 1947. Throughout the years the band had different members join and leave. In late 1963 singers Junior Braithwaite, Beverley Kelso, and Cherry Smith joined the Wailers, by the early 1970’s, Marley and Bunny Wailer had learned to play some instruments and brothers Aston Barrett (AKA ‘Family Man”) played bass and Carlton Barrett played drums. In 1974 Bunny Wailer and Peter Tosh left the band. New band members the Barrett brothers, Junior Marvin and Al Anderson on lead guitar, Tyrone Downie and Earl Lindo (AKA Way) on keyboards, and Alvin Patterson (AKA Seeco) on percussion. For his backup vocals Marley named them the I Threes, they consisted of Judy Mowatt, Marcia Griffiths, and Rita Marley (Marley’s wife), providing backing vocals. From 1972 to 1980, Bob Marley & The Wailers recorded, toured, and performed before countless millions worldwide

Bob Marley and The Wailers are mainly associated with reggae music, the Afrocentric religion of Rastafari, and the Caribbean island of Jamaica. Even after Bob’s death from cancer over three and a half decades ago, The Band’s music continues to be revered all around the world. Since Bob Marley’s untimely passing in 1981, Familyman vowed to keep a promise he made to his leader and friend right before his passing from cancer, that he would hold the band together and maintain the music’s quality. Since then, Familyman has carried on the mission to keep The Wailers together – just as Bob requested.

This essay will go though these albums and look at some songs that have passed the test of time. Some songs that impact the audience of past, present and will impact the audience of the future. Bob Marley and The Wailers main message is peace, they also speak up a lot against oppression. Songs like Buffalo Soldier from the Confrontation album which tackles race, from that same album “Give Thanks and Praise” which speaks to religion.“Redemption Song” which addressed freedom; and “Exodus” which address the Rastafari religion ; “Get up stand up” which address fighting for what you believe in. and “Three Little Bird” which addresses being one with mother earth, all from one of the bands largest selling album the Legend: The Best of Bob Marley and The Wailers. Then we have “So much Trouble in the World” from the Confrontation album, and last but not least “War” not as well known that is found on the Survival album.

The first song to be analyzed is ‘Buffalo Soldier’. The song was written by Bob Marley and Noel Williams in 1980. The song first appeared on the 1983 album Confrontation then later appeared on the very famous Legend album, it became one of the bands best-known songs. The title and lyrics refer to the black U.S. cavalry regiments, known as Buffalo Soldiers, that fought in the Indian Wars after 1866. The name Buffalo Soldiers was given to the black fighter by the Native Americans due to the texture of their hair. The name was embraced by the soldiers, they linked it to the buffalo’s fierce bravery and fighting spirit. During the Song the band speaks on how the black man had to protect the white man but was still oppressed in a country that they were fighting for. The song states “Stolen from Africa, brought to America, fighting on arrival, fighting for survival”. That verse from the song tells about how the Africans were brought to America against their will.

The song continues on in the next verse saying, ‘Then you wouldn’t have to ask me, Who the ‘eck do you I think I am.’ When I hear this, I feel he is speaking out for the African Americans who are not treated as equals. The song addresses race, the band linked what the African American Soldiers suffered and overcame during that time for survival, and recasts it as a symbol of black resistance with the wrong that was going on in the world during that time. This song has passed the test of time because race is one controversy that is still happing today. Each day in the news you hear about another shooting involving minorities being killed by other citizens or even getting shot by cops all for just being African American. We can see a connection with cases such as Trayvon Martin where he was shot and killed due to the fact, he looked like he did not belong in a certain area. We can also look at the stop and frisk law of New York that targets minorities. Incidents like these are some current day situations where African Americans are just fighting for survival.

Then there is “Redemption Song” which addressed freedom, this song was inspired by the legendary Jamaican civil rights activist leader Marcus Garvey a speech titled “The Work That Has Been Done”. Genre: Rock and Roll ;Tempo: Slow steady pace verse to verse with the I three harmonizing ; Style: Reggae; and Instrumentation: This song Guitar, Bass, Keyboard, Drums, and Tamberine.The song written in 1970, was released in October 1980 as a single from the album Uprising by Bob Marley and the Wailers. Uprising was the last studio album released during Marley’s lifetime. During this time Marley was suffering from cancer. Unlike most of the bands music, this song was purely solo acoustic, it contains no other instruments except for an acoustic guitar, which Marley played himself.

With “Redemption Song” the band was addressing dealing with redemption, freedom and emancipation. The song states, “Emancipate yourself from mental slavery non but our self can free our minds”. Many compare this to being bonded / shackled in the physical aspect, whether it be in chains or incarcerated. One’s mind can also be in a form of incarceration instead of in the physical aspect, this is how this song spoke to fans in 1980 and today. Many are restricted due to lack of knowledge and plain ignorance; this is a whole different kind of bondage. With knowledge you will have freedom. In this current generation one can see this as stating only you can get the truth that you seek. With Facebook and other social media sites and News outlets like CNN and other New station broadcasting their version, you must search and find the truth for yourself. The message of “free our mind” is also relatable today. Considering the last presidential race, which information was spread using news outlets. If we can do the task as the song states and free ourselves, we can draw our own conclusion. In recent years the song has been covered by Rihanna, Madonna, and Johnny Cash just to name a few, this goes to show the importance of the messages portrayed in the song originated by Bob Marley and The Whalers.

Next is the song “Exodus” which addresses the Rastafari religion like. This song was done in London, due to the aftermath of a gun attack on Marley’s home in Jamaica. The violence against his home was in reference to his upcoming performance to support the election occurring at the time. Bob Marley and mostly all the Wailer’s practice the Rastafarians Religion. Like most religions there is a foundation of beliefs that are followed. When most individuals think of Rastafarianism, they think of things like dreadlocks, reggae music, and marijuana. These few thoughts are not a full grasp of Rastafarianism. Rastafarianism began with a pro-African movement in Jamaica in the early part of the 20th century. Two leaders, Leonard Howell and Marcus Garvey helped shape what would become Rastafarianism. Rastafarians see Garvey as the return of John the Baptist, citing that his prophecy came true with the coronation of Haile Selassie as Emperor of Ethiopia. Rastafarianism takes its name from its worship of Emperor Haile Selassie I of Ethiopia as the return of Christ.

Going back to the song, a verse of the song “Open your eyes and look within are you satisfied with the life you’re living? We know where we’re going, we know where we’re from We’re leaving Babylon, y`all We’re going to our Father’s land”. For those of us who are religious whether it back in 1977 when the song was written or today 2022, the message is clear! You know yourself and your heart, you know if you are good or evil. As the song states depending on which you are when you leave Babylon (earth) you may go to the Father’s land (Heaven).

Lastly this essay will analyze the song “War” which is not as well-known as other songs; it is found on the Survival album. This word alone is understood and feared no matter the time period, race, area of the world, sex, or age. This song is what my fourteen-year-old son would call bars, with no real hook Bob Marley and the Wailers speak real and raw. The first three verses are so impactful it captures you right away: “Until the philosophy which hold one race superior and another Inferior Is finally and permanently Discredited And abandoned Everywhere is war Me say war. That until there no longer First class and second-class citizens of any nation Until the colour of a man’s skin Is of no more significance than the colour of his eyes Me say war. That until the basic human rights are equally guaranteed to all, without regard to race Dis a war”. The song is saying if there is racism there will be hate, if there is hate there will be fighting, and if there is fighting there will be war. If there are economics classes (poor vs rich) and discrimination (white, black and brown) we will have war. To simply put without equality people will have problems and problems can turn into war. We are doing wrong by discriminating against others instead of helping each other therefore, the cycle of war will not end until “All men are created equal”.

As one can see the songs mentioned in this essay are still relevant today. From “Buffalo Soldier” which tackles Race; too “Redemption Song” addressing freedom to free your mind; “Exodus” bringing light to the Rastafari religion; and “War” speaking to a topic that as an Army mom hits very close to home. The Wailers music is one that we can reference to as timeless; no matter the decade, whether you are a Baby Boomer, Generation X, Generation Y, or Generation Z, you can find several Bob Marley and The Wailers songs that connects to a point in your life past, present and future