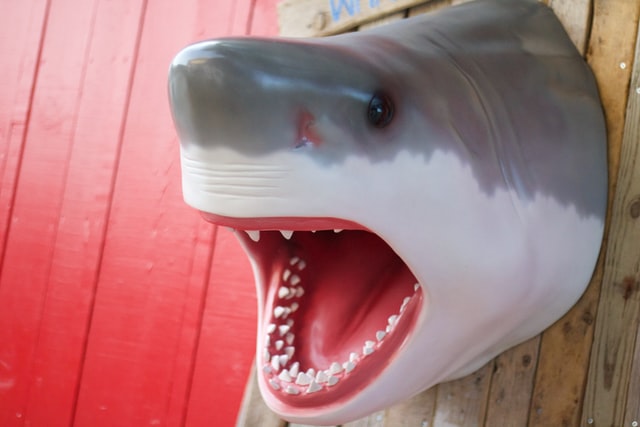 According to the Oxford English Dictionary, the term ‘blockbuster’ is ‘a thing of great power or size, in particular a film, book, or other product that is a great commercial success.’

The film ‘Jaws’ was directed by Steven Spielberg in 1975 and is considered one of the most successful and influential American thriller films to this day. The film is a prototypical summer blockbuster and ‘its release is regarded as a watershed moment in motion picture history.’ Based on Peter Benchley’s 1974 novel which remained on the bestseller list for 44 weeks, the film’s narrative involves a giant killer great-white shark unleashing chaos at a beach resort and starred actors such as Roy Scheider, Robert Shaw and Richard Dreyfuss. The triumph of this film enabled it to become an industry-changing blockbuster and this essay will be discussing how Jaws is an early example of this.

By the 1920s, eight studios established themselves in Hollywood, including MGM, Paramount, Warner Bros, 20th Century Fox and RKO. These production companies became vertically integrated, spreading risks and gaining stability by guaranteeing a market for their films. Janet Staiger argues that ‘one of the problems a vertically integrated film industry faced was not only that it broke antitrust laws, but also that the major studios were burdened with a self-generated demand- to fill their own theatres.’ Production values of films increased and each film became reputable and distinguished, with these changes functioning as inducements to the rise of blockbuster films. Economists comment that ‘the growing emphasis on blockbusters reflect a rational adaptation by risk averse firms to changing market conditions.’ ‘Jaws’ is considered to have marked the arrival of the New Hollywood, and its cultural phenomenon led the film to be a successful, early example of the Hollywood blockbuster, bringing an emphatic end to Hollywood’s five year recession.

Nowadays, the term blockbuster is so common in the film industry that it has taken on a meaning of its own. Jaws is credited as the movie that created the summer blockbuster. Not only is this because of its high concept, the film constantly reminds you that it is summer, which helped fuel the fact that it is considered the first summer blockbuster. The film influenced the world, making an impact on pop culture and has continued to be referenced in many other popular films. This was the first movie to ever pass the $100 million mark at US box office, even exceeding William Friedkin’s ‘The Exorcist’ in 1973, which had grossed $89 million. Almost half a century after its release, ‘Jaws is currently the 7th highest grossing film of all time when adjusted for inflation’. This is up there with many of the box office triumphs including ‘Gone With The Wind’ (1939), ‘Star Wars’ (1977) and ‘Titanic’ (1997). According to Erbland, ‘made for less than $9 million, “Jaws” went on to make over $470 million in global returns, including a $260 million domestic take that earned it the top spot at the box office in 1975.’ Jaws hit the theatres with a lot of hype after Universal’s $2 million spend in marketing the movie. Universal Studios swarmed the prime-time television market with over $800,000’s of trailers prior to the films launch, and proved to be successful after incredibly eager crowds would queue hours before showings, which would circle around the block and ‘as a result, the term blockbuster was coined to refer to a movie that inspired such avid devotion for the traffic around the block where the theatre was located was effectively ‘busted’’. The water cooler effect and word of mouth also helped create the films buzz in which the film was exhibited in over 400 theatres on the night of its launch, a considerable number in 1975, compared to blockbusters today booking between 2,000 to 3,000 theatres. ‘Jaws changed the business forever,’ writes Peter Biskind. ‘As costs mounted, the willingness to take risks diminished proportionately. Moreover, Jaws whet corporate appetites for big profits quickly, which is to say, studios wanted every film to be Jaws.’

Jaws is considered an early example of the Hollywood blockbuster after its immense influence on the film industry. Spielberg is said to have created the first event movie after the making of Jaws as its launch generated substantial attention from audiences, causing the release itself to become an event. Jaws capitalized the ‘summer release’ trend and is now referred to as the summer movie season, which is now accountable for almost forty percent of Hollywood’s annual box-office revenue. Three influential films, ‘Bonnie and Clyde’ (1967), ‘Easy Rider’ (1969) and ‘American Graffiti’ (1973) were all released in the summer, before the making of Jaws. Studios began targeting youth audiences during this season as all three films became increasingly popular to the younger generation. Universal perceived the potential of targeting this group so aimed the Jaws trailer to attract a younger audience (15+) as it coincides with summer holidays and the films narrative would appear even more terrifying and intriguing to the younger audience. As well as marketing the film through a trailer, Universal advertised Jaws on TV, which as extremely rare for Hollywood studios before the summer of 1975. They launched 30 second trailers during primetime television three nights prior to the movie’s release and proved successful, breaking box office records which led them to become the first Hollywood blockbuster. Spielberg also changed the film industry after the production of Jaws as he set records for high budget films. He exceeded his budget by 300 percent, spending over $12 million on the film, which in 1975 was four times the production cost for an average film. The shooting on set was meant to last 55 days, yet extended for two additional months which raised both the budget and studio expectations. Jaws also influenced the film industry by changing how studio films were released. ‘Prior to ‘Jaws,’ Hollywood would slowly roll out release of its films over several months. The one exception was ‘The Godfather’ in 1972, which Paramount opened in five theaters at once before moving to 316 theaters the following week.’ However, Jaws opened in 465 theatres, taking $7 million in the first week, regaining production costs by the second week, overthrowing ‘The Godfather’ after just 78 days.

‘It also welcomed in a new era of mass movie marketing and merchandising. This would be capitalised on by the huge conglomerates that would take over and vertically integrate the entire film production and distribution network in the 1980s.’ To conserve the identity of both the film and book, synergising the film with products was an easy way to generate more revenue as audiences desired the blockbusters merchandise. All advertising and promotional material included the same logo of a shark and a girl swimmer, which everyone was able to recognise. T-shirts, posters, inflatable sharks, beach towels, board games and fancy dress costumes were highly demanded after the release of the film and the logo appeared in the films advertising itself, in newspapers, magazines and on billboards throughout the country. Ice cream flavours ‘Finilla’ and ‘Jawberry’ were hugely popular and Universal Studios made a ‘Jaws’ ride in Florida, Hollywood and Japan which became a huge attraction. The merchandising and synergy brought the studio major earnings and has therefore changed cinema, with most blockbusters nowadays promoting upcoming films through merchandising. Despite Universal taking advantage of the film’s popularity with intensive marketing tie-ins during the 1980’s, the film still maintains its place in pop culture. The two-note theme tune and quoted lines “You’re gonna need a bigger boat” allows audiences to identify with the movie, even if they haven’t seen it, which evidently proves the global success of Spielberg’s groundbreaking summer blockbuster.

One of the most pivotal reasons that Jaws is regarded as a Hollywood blockbuster is that it is a high concept film. The idea of it being a ‘high concept’ stems from it being a single, simple narrative which is easily understood by audiences and therefore makes it easy to promote and advertise. Steven Spielberg once famously defined high concept: ‘If a person can tell me the idea in 25 words or less, it’s going to make a pretty good movie.’ Wyatt expressed that ‘Spielberg’s opinion relates well to the vision of high concept expressed by other Hollywood representatives: a striking, easily reducible narrative which also offers a high degree of marketability.’ High concept filmmaking transpired after WWII America, a time where Hollywood studios were unable to produce films that would regenerate decreasing profits. The success of Jaws’ high concept simplicity kept the movie profitable whilst the industry was in decline, as audience’s prefered simple and remarkable narratives, compared to complex ones. ‘Within the film and television industries, high concept most frequently is associated with narrative and, in particular a form of narrative which is highly marketable. This marketability might be based upon stars, the match between a star and a premise or a subject matter which is fashionable.’ The films stars, Roy Scheider, Robert Shaw and Richard Dreyfuss were all well known, prominent actors of the time, so including them in the trailer was a clever marketing tool to gain an audience from fans of these actors and obtain new ones through the high concept narrative and new, unusual special effects. The realism of the ocean scenes helped build the hype around the film as scenes looked a lot more authentic, being actually shot in the ocean, despite being advised to film in a studio tank which was becoming increasingly popular in films during the 1970’s. Special effects were constructed in Jaws to make the film terrifying and to create a sense of realism for the audience. Robert A. Mattey was hired to build a polyurethane Great White shark to instil fear to the beach-going public in 1975, which stands up astonishingly well and is sparsely used throughout the film to build suspense.

Many critics dismissed Jaws as an utterly mechanical exercise in viewer manipulation. James Monaco cites Jaws itself as the basis for the “Bruce aesthetic”, whose ultimate cinematic effect is “visceral- mechanical rather than human”. Despite this, animatronics became increasingly important to the next few decades as after the success of Jaws, animatronics and special effects released endless opportunities for movies, including Jurassic Park, King Kong and E.T. The triumph of Jaws and its success of becoming the first summer blockbuster lead the film to be nominated for 19 awards, with 14 wins including ‘Best Film Editing’, ‘Best Music’ and ‘Best Advertising’ and led to three sequels, earning nearly $800 million box office gross worldwide.