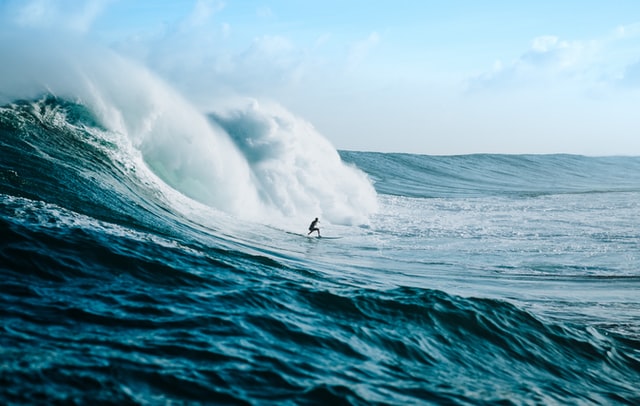 The film “Jaws” directed by Stephen Spielberg, based on the novel by Peter Benchely, is a thriller about a great white shark that terrorizes tourists on Amity beach. The opening of a film is important because it sets the tone for the rest of the film, as it creates suspense and tension. It grabs the audience’s attention, and introduces the story. Spielberg executes this perfectly in the opening of Jaws, as he uses different camera angles and shots alongside lighting effects to create atmosphere and tension. Music and sound effects are played in the background as well, which adds to the dramatic visual images created by him. The victim’s feelings and emotions also add intensity and suspense, which Spielberg uses specific dialogue to show. The film’s use of cinematography, misc-en-scene and music works together to beautifully capture the thrill, suspense and terror in a war between a shark and humans.

The film commences with soft, relaxing noises of sharks communicating. This instantly sets the scene as being underwater. As the credits begin, the first note of the famous “Jaws” music plays, indicating that a shark is present. Spielberg does this to alarm the audience, creating fear and suspense. The music then begins to speed up, while the camera moves faster along the reef. The “Jaws” music begins, which sounds like a heartbeat, a symbol of the shark. This creates a sense of fear that something bad is going to happen. Although the shark is not shown, Spielberg forces the audience to imagine what the shark would look like, thus creating more suspense. When the music hits peak intensity, it suddenly changes to the sound of a harmonica, being played on the beach by a teenager. The harmonica is a peaceful and relaxing sound, creating a contrast from the “Jaws” music. The relaxing sound is important for allowing the audience to believe that the danger is gone, giving them relief after being on edge. However, the harmonica is suspiciously too relaxing, as it reminds the audience that danger is still nearby lurking, waiting to strike. The opening minute sets the tone of the film, causing suspense and fear for the audience.

When the characters are first introduced, they are shown smoking and drinking around a bonfire on the beach. They are relaxed and carefree, causing the audience to become anxious as the teenagers are unaware to the danger that is nearby. This sets the teenagers up as being victims in the film, due to their carefree nature. After all the teenagers are shown, the camera focusus on Chrissie. While everybody else is laughing and chatting away, she is sitting by herself, isolated from the rest of the group. This makes her intriguing, and allows her to instantly stand out to the audience. The sound of happiness and laughter is heard all throughout the scene, foreshadowing that the teenagers are completely oblivious of the horrible events that are about to occur.

As the film progresses, two teenagers are seen racing towards the beach. The pair then gets separated, as the male is struggling to take his clothes off. He decides to relax on the beach, due to being tired and intoxicated. Meanwhile Chrissie dives into the water. The camera pans out, showing how large and empty the ocean is. This emphasizes how isolated and disconnected she is from other people. The camera also shows that Chrissie is in the water at sunset, due to the beach being very dark. This hint of darkness sets the tone for what is yet to come. Also, due to the beach being empty, there is no coastguard on duty to aid in case of an accident. The film then goes silent as Chrissie calmly swims around in the water, making it an unnverving moment for the audience, as they are aware she is swimming amongst a killer. The calm waters make it appear that the ocean is safe, however calm waters are dangerous, as trouble is always waiting to occur.

A melodic tune then begins to play while Chrissie waits for the boy to join her, forcing the audience to believe that the music will soon turn into the Jaws music, signaling the presence of the shark. The camera shows Chrissie in the water at ocean level, and then switches to the shark’s point of view. The shark is focusing on her legs and begins moving closer. The music then changes to the “Jaws” music, playing louder as the shark gets closer to Chrissie. This shark eye point of view allows the audience to see exactly what the shark sees, and thus building suspense. As the shark begins advancing towards Chrissie’s legs, it is obvious what the shark is aiming for. The camera also zooms in on Chrissie, increasing panic amongst the audience, as it appears as if Chrissie is about to be attacked. As the music begins to fade, a sharp burst is heard while the shark attacks her and starts pulling her around, while the camera switches to close ups at water level. This short but intense sound alerts the audience and confirms that their fear has become Chrissie’s reality. Also, the water level camera view is a film technique that makes the audience feel as if they are in the water too. Chrissie is then seen frantically kicking, screaming and trying to free her from her attacker, making it ambiguous to the audience as to what is attacking her. While the water is splashing around due to Chrissie being pulled into the water, it shows how dangerous the antagonist is to humans. When Chrissie breaks away for a moment and swims to the buoy, it gives the audience a moment of hopefulness, as she clings onto it, calming down as she is no longer being attacked. This creates a short glimmer of hope amongst Chrissie and the audience, as her attacker may have left. However, seconds later Chrissie’s body is being yanked back into the water, destroying hope. Following Chrissie being submerged into the water screaming, the film then goes silent. The camera then shows her friend laying on the beach, concluding that the killing was done. This creates a suspense for the audience, as they are seeing that the shark attacks have just begun.

In conclusion, the opening of a film is vital for creating suspense and tension, thus grabbing the audience’s attention and setting the tone for the rest of the film. Spielberg was able to do this successfully with the use of cinematography, misc-en-scene and music. These all blended together to create an equilibrium of tension. “Jaws” is a timeless classic, as Spielberg was able to transform a simple plot into an inspiration creation around the world.